Multivariate Gaussian has the characteristic that the conditional distributions are also Gaussian (and the marginals too). For the proof, interested readers can refer to Chapter 2 of PRML book by C.Bishop.

For the 2D case, the conditional distribution of \(x_0\) given \(x_1\) is a Gaussian with following parameters:

Because they are so similar, we can write just one function for both of them. We used NumPy’s random.randn() which gives a sample from standard Normal distribution, we transform it by multiplying with the required standard deviation and shifting it by the mean of our distribution. The following function is the implementation of the above equations and gives us a sample from these distributions.

Now we can sample as many points as we want, starting from an inital point:

Let’s see it in action. First let’s plot our true distribution, which lets say have the following parameters 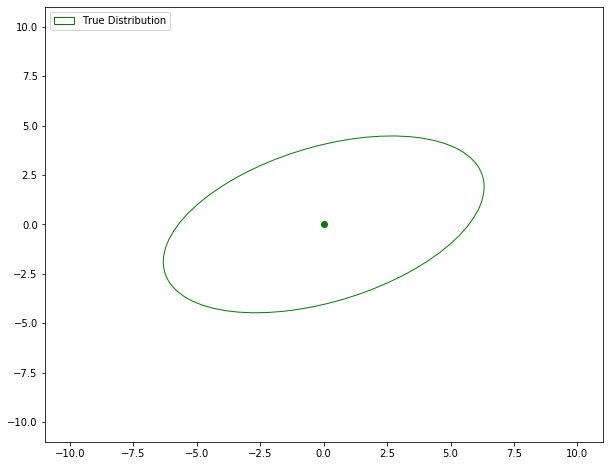 The complete code for this example along with all the plotting and creating GIFs is available at my github repository. For plotting Gaussian contours, I used the code from this matplotlib tutorial.

Now, of course, you won’t be using Gibbs sampling for sampling from multivariate Gaussians. So for any general intractable distribution, you need to have conditional samplers for each of the random variable given others. And you will be good to go.